Coming up with boss birthday wishes, sometimes on the spot, can be daunting, especially if you have a toxic boss who has mistreated you and is impossible to satisfy.

Need inspiration? You're only a few seconds away from original, entirely boss-safe birthday greetings. To get started, check out the 100+ birthday messages for your boss, right below.


Jump to These Sections

Don't know what to write in your manager's birthday card? To get started quickly, click and jump to any section below with examples of birthday messages that suit your boss.

Sometimes, you don't have the time or inclination to write long, drawn-out boss birthday wishes. That's when short birthday messages for your boss are the best route to take. Below are short examples you can use as inspiration. 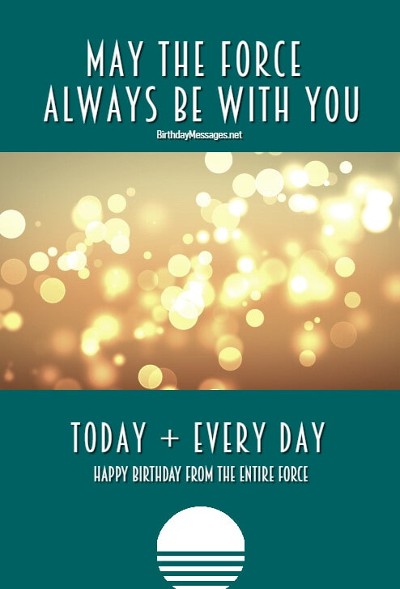 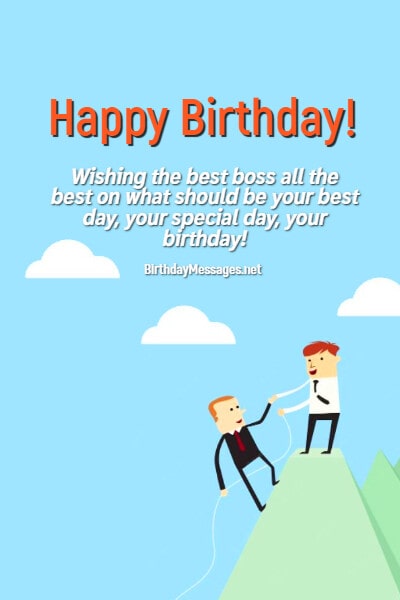 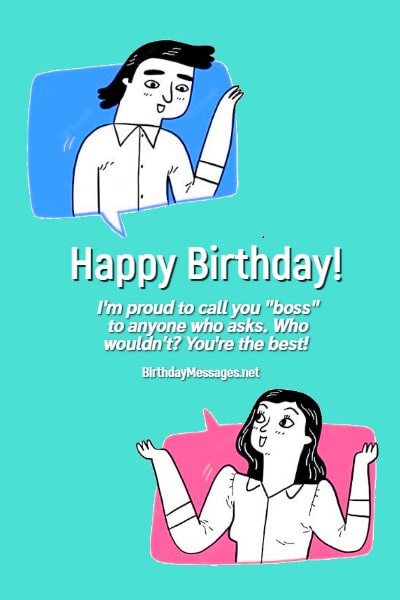 The next time you and your colleagues need to write birthday greetings for your boss, as a team, get inspired by the examples below. 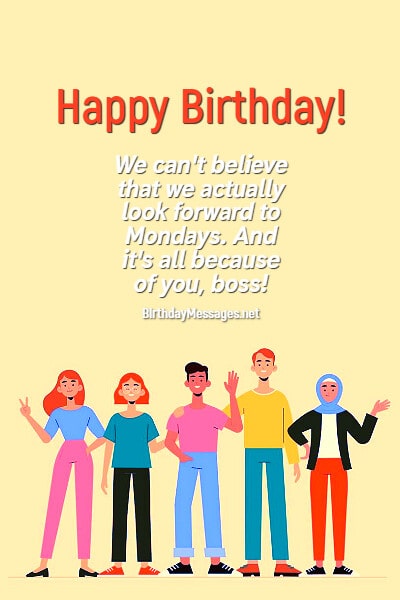 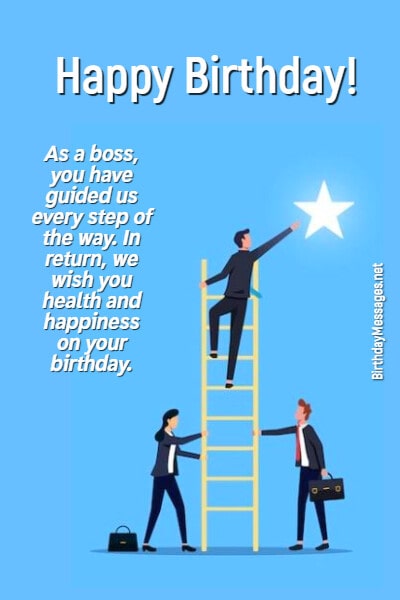 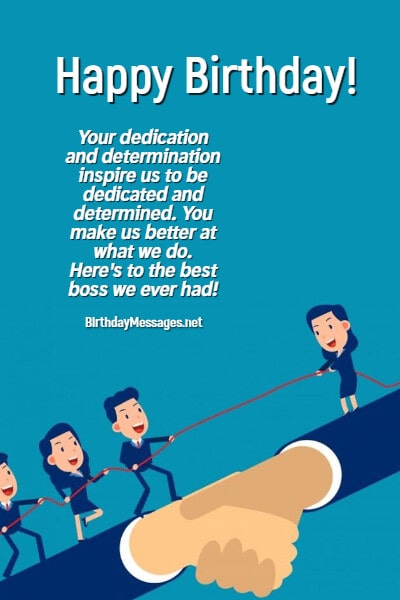 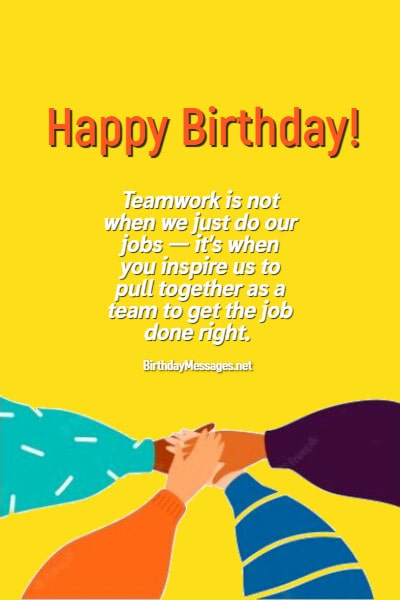 With certain bosses, formal boss birthday wishes are ideal, especially if your boss is more of an introvert and prefers a professional approach to work. Need inspiration? To get started, check out the examples of formal birthday messages for bosses in this section. 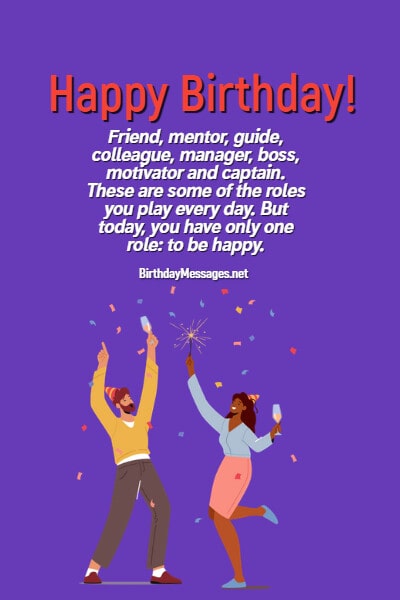 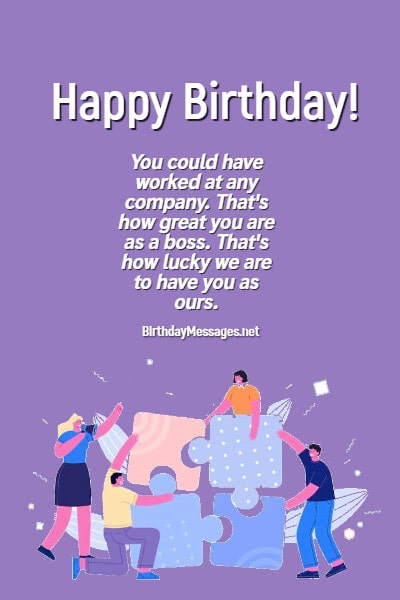 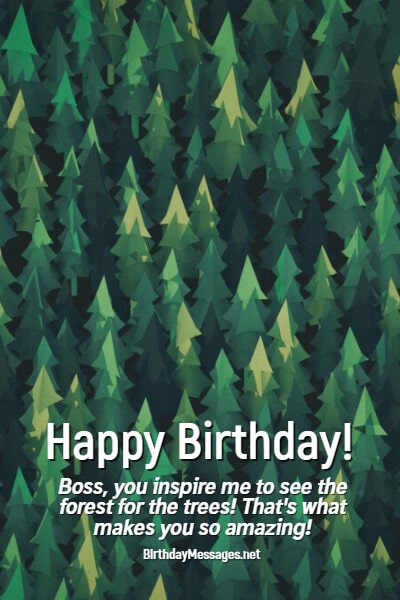 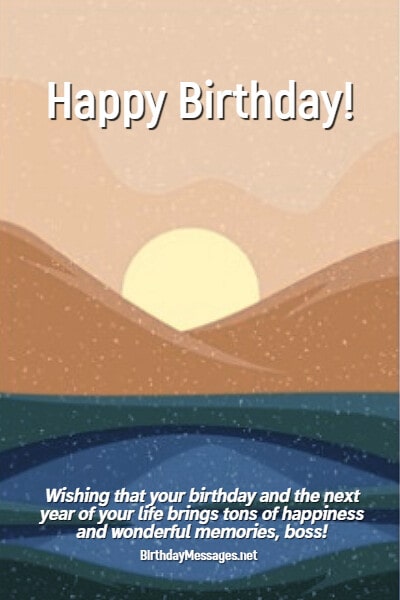 The best boss birthday wishes are the best for a very good, very real reason. These boss birthday messages are complimentary and, more importantly, real for truly great bosses, who deserve all the praises we can heap on them. 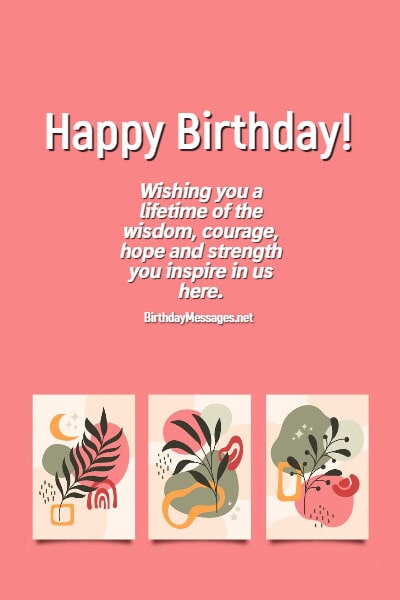 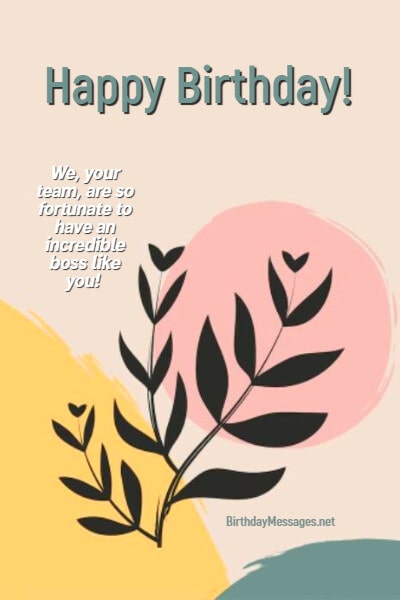 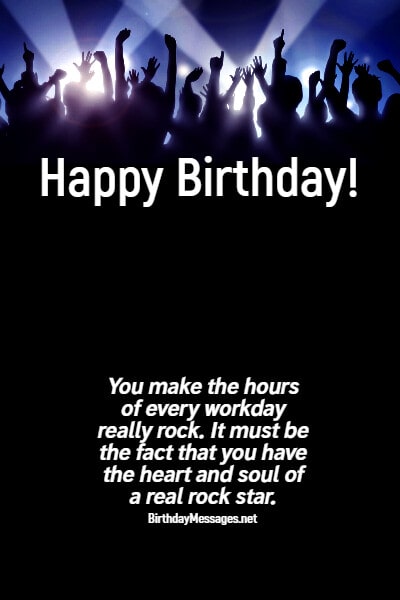 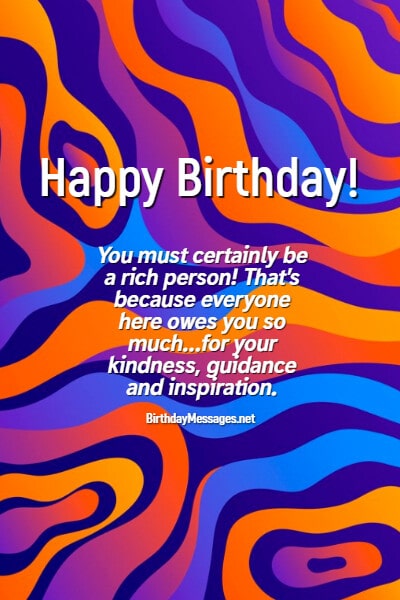 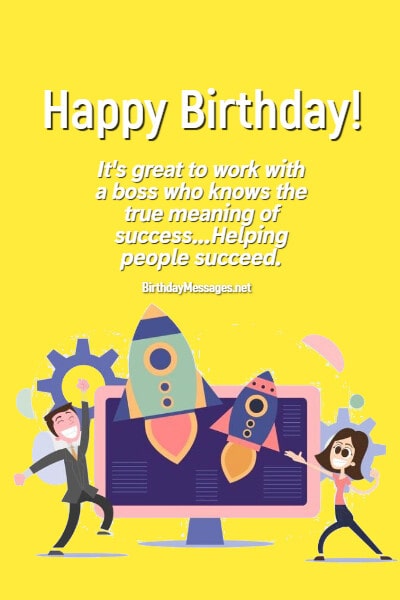 Toxic bosses come in many shapes and sizes, but all share certain traits: they're overbearing, overly critical, tuned-out and love to pick on people, publicly pointing out their shortcomings.

Even worse, some bosses also treat the workplace like an "old boys" club, fostering a toxic environment based on sexist, racist and homophobic beliefs.

Is your boss toxic? If your manager or director shows any or all of the following signs, he or she is a toxic boss:

If you boss is toxic, get inspired by the examples of boss birthday wishes below. Each one expresses something so ambiguous that it basically says nothing at all — just what these toxic human beings deserve on their birthday.

It's also okay to be a little funny with your boss on his or her birthday. Want to see funny boss birthday wishes? See some hilarious (appropriately hilarious, since you don't want to offend your boss) birthday messages! Below are some examples you can use with your boss. 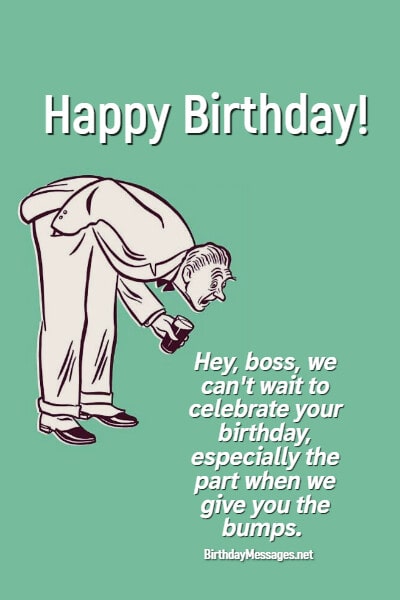 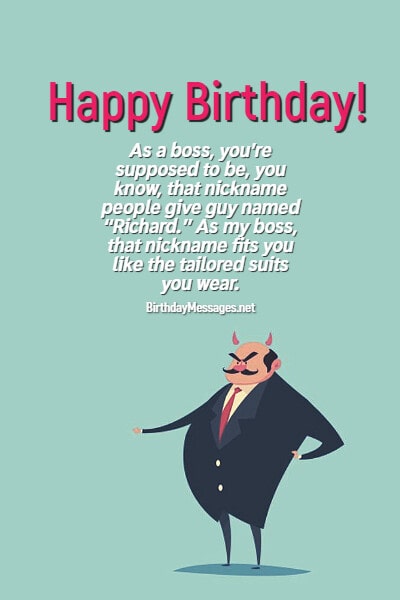 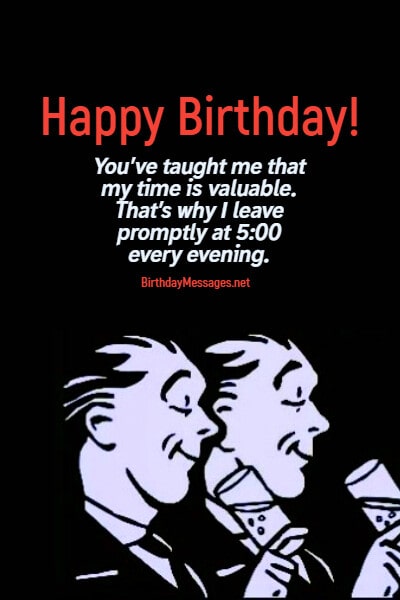 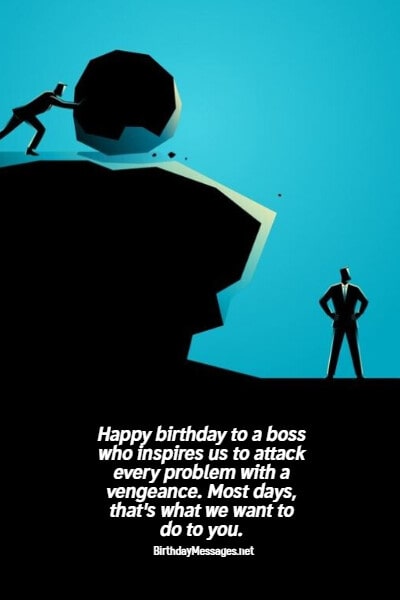 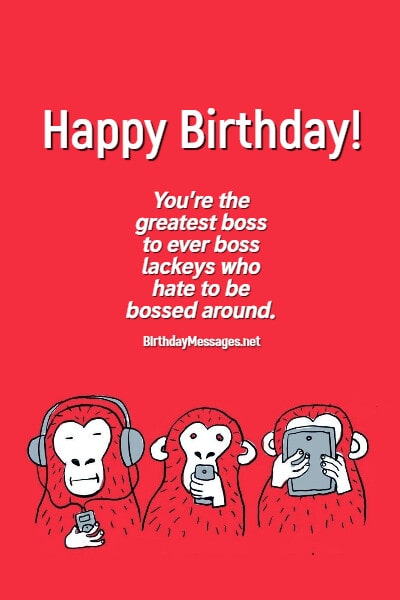 HOW TO WRITE BIRTHDAY MESSAGES
FOR TERRIFIC & TOXIC BOSSES 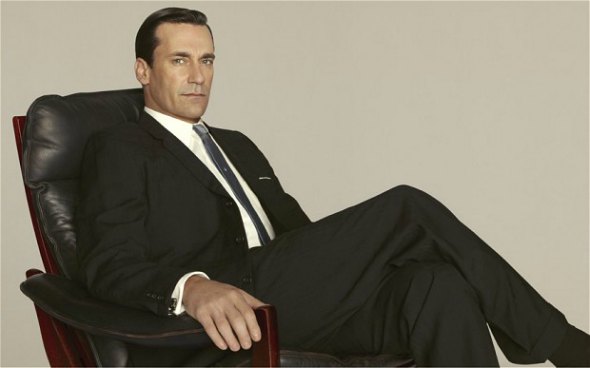 What are perfect boss birthday wishes?

Coming up with a birthday wish for your boss is not easy. It can even be daunting, especially if you have a toxic boss. Even if you have the best boss in the world, this is not an occasion you want to mess up.

So what type of boss birthday wishes should you write?

If your boss birthday wishes are too cold, it may suggest you don’t like him or her. Remember, bosses also have feelings (yes they do, really). This caveat applies to all bosses. By "cold," I mean impersonal. This kind of birthday greeting has no personality at all.

Of course, a very personal birthday greeting may imply the opposite: you like your boss too much. Plus, he or she might feel you're getting a little too close for comfort.

To make your boss feel appropriately special, opt for boss birthday wishes that show your boss how much you respect him or her. Depending on the type of boss you have, this could be challenge or a cake walk. Here are the most common types of bosses — according to monster.com — and the ideal boss birthday wishes for them.

If your boss doesn't deserve any respect, lie or select "happy" boss birthday wishes, the type you would write for anyone. You can't go wrong with generic "happy birthday" greeting.

No matter what anyone says, every boss likes, perhaps even deserves, to get a little attention on their special day! After all, that's what makes it so special.


Can your boss actually be offended by your message?

The short answer: yes. According to Psychology Today, people get offended by the slightest sign of disrespect. Knowing why may prevent you from offending your boss with the boss birthday wishes you write in his birthday card. See what Psychology Today had to say right here.


Be the First to See What’s New